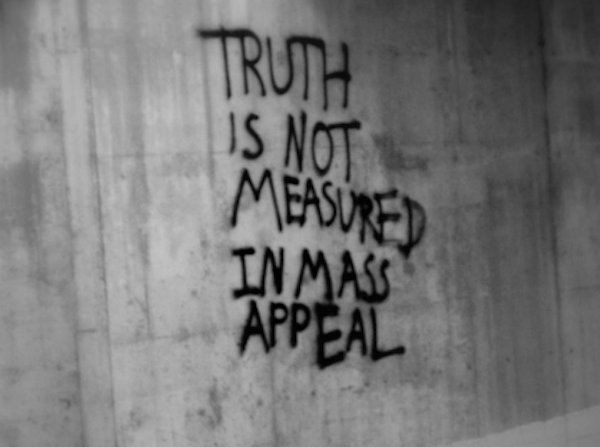 The Three Stages of Truth

“All truth passes through three stages. First, it is ridiculed. Second, it is violently opposed. Third, it is accepted as being self-evident.”
- Arthur Schopenhauer, Philosopher

Galileo Galilei was born in Pisa in 1564. His father wanted him to become a doctor and sent him to study medicine at the University of Pisa. While there he discovered a natural talent for math, and eventually left medical school to pursue mathematics. In 1609, Galileo learned about the spyglass, a new invention helping people see distant objects by making them appear closer. This fascinated Galileo and led him engage his mathematics and engineering talents in a quest to build a more advanced spyglass. He ended up inventing the first telescope. Using the new device, Galileo became the first person to observe the Moon up close. He discovered that its surface wasn’t smooth, but actually mountainous and pitted like Earth! Continuing his astronomical research, he would use his telescope to establish that small moons circled Jupiter, and he closely observed the rings of Saturn and the phases of Venus.

Galileo’s experiments reinforced his confidence in the Copernican theory stating that all the planets, including Earth, revolve around the Sun. This view put Galileo very much in the minority. The Catholic Church strongly endorsed the “geocentric” idea that the Earth—God’s Earth, dwelling place of man—was the center of the universe.

When Galileo published his discoveries and openly stated his belief that the Earth circled the Sun, he was summoned to Rome. The Vatican accused him of being a non-believer opposed to church teachings. Ultimately, though, it decided to spare him from punishment as long as he refrained from publicly advocating for heliocentrism.

Deepening his study of the heavens, Galileo found further evidence that the planets, including Earth, revolved around the Sun. Years later he again decided to publish his findings, this time in a book. The decision enraged Church leadership and Galileo was once again brought to Rome to face the Inquisition for being a heretic. This time he was not so lucky. Sentenced to life in prison, he would die under house arrest in 1642.

The controversy stirred by Galileo’s discoveries would subside during the next two centuries. The Church gradually eliminated all traces of opposition to his core scientific findings—most notably the idea that the Earth orbits the Sun. His arguments had traced a path from ridicule to violent opposition to acceptance as self-evident.

When I was in elementary school I wrote a report on Galileo, so obviously this makes me an expert on the subject (jk!). In all seriousness, as I revisited Galileo’s story, I couldn’t help but see parallels with the dilemma facing today’s innovators, creators, and entrepreneurs. Not that they are up against an institution as powerful as the Renaissance Catholic Church, but rather this: To create significant value, they must harness their creativity to do things differently—sometimes dramatically differently. But as Schopenhauer’s theory states (and countless experiences have confirmed), innovators will inevitably be met with ridicule and fierce opposition, no matter how positive their pursuit. Humans are wired to react negatively to change—especially change to deep-seated ideas, practices, and behaviors.

Once you internalize Arthur Schopenhauer’s theory, you realize you must accept that the change you seek to make will be met with resistance. And the bigger the change you envision, the more resistance. Knowing this helps eliminate the false expectation that people will instantly accept and embrace your idea, celebrating your wonderful insights and creations from the get-go.

Following this stage, your journey becomes a battle of believing in yourself more than the external, often negative forces. You must quiet the noise, persist, and continue to push forward with what your soul is telling you to do. The trick is to stick to your course while not acting belligerently when questioned, or ignoring quality feedback—you should always be looking for non-biased data or evidence that can support your beliefs or validate feedback. Continue to iterate on the manifestation of your idea until you get your innovation to a stage where its value and rightness appear self-evident. Your journey will require vigilance and strength. You will need to convince people, one at a time, until you build an audience big enough to provide enough sustenance for your idea to live on its own.

When you reach that place, the real-world validation and internal fulfillment you experience will be so great you might just start another such journey all over again. Accept that no matter what your idea will need to pass through the three stages of truth and that the earlier start fighting for what you believe in, the more quickly it will become self evident. Persist.