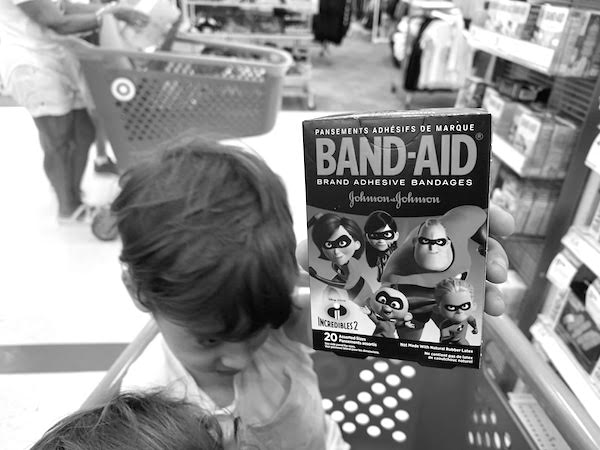 Apple Card & the Power of Brand

My son likes to play with Band-Aids.  I think he believes they are stickers or at least something he can stick them on things and he likes that.  Yesterday when we took our weekly pilgrimage to Target he insisted on getting a new box.  As I pushed the shopping cart alongside the bandage section as he called it, he rose up slowly, meticulously reviewing each of the animated characters on the assortment of boxes, from Buzz Lightyear to Dory to Trolls, the characters adorn the boxes (and Band-Aids inside).  He thought of which he had gotten in the past, felt that he wanted to try something new, and settled on The Incredibles.  He was happy and that made me happy, so life was good.

Now I could have been annoyed by this purchase, it was an unnecessary expenditure, one of a myriad that come with having kids.  But that would not have been productive.  I could have also written it off as a childish dalliance.  Which is exactly what I did.  With training these become joyous over time.  My third option would have been to act like I was from California and gotten upset with Johnson & Johnson for their McDonald’s-like manipulation of his youthful instincts.  But what the moment actually did was get me thinking about my recent experience with the Apple Card.

Apple, America’s most prized corporation, recently released a credit card.  And in my estimation it is one of the savviest, and potentially one of the most profitable, brand plays of all time.  The minute I heard about the Apple Card I wanted one.  So I signed up and waited for them to tell me when it would be available.  When the email came I was giddy, quickly ordering my Apple Card so I could be one of the first to have one in the wild.  In minutes I filled out the forms, was approved for digital use on my iPhone through Apple Pay, and within two days I received my beautifully packaged and designed card in the mail.  It is white titanium and I actually enjoyed activating it.  All I had to do was swipe it over the back of my phone and it magically came to life.  These type of small moments go a long way with me.  Since then, I have used my card exactly once.  For a $27 purchase during a transaction where I didn’t even realize I was using the Card.  Since it’s metal like my Amex, I mistook it for that card and now I have to remember to pay the another bill this month.  They got me.

But what I have done a lot since I received my Apple Card is show it to people.  I was definitely in the first wave of users and it looks really cool.  I am proud to have it for what it says about my taste level, my “in the know-ness,” and I am especially proud to have it before other people do.  The practical benefits of the card are minimal—seamless integration with your iPhone, 2-3% cash back on purchases, and no annual fees—but the emotional reward has been plentiful.  It is the credit card equivalent of a pair of Yeezy Boost sneakers and can only be outdone (for now) by a black Amex, the credit card equivalent of a Ferrari.

This may sound shallow—but that’s only because it is and we as human beings we are.  We live in a time where our naturally occurring tribal identities are often replaced by associating with brand and corporate identities.  And just because you wear Patagonia, or choose a non-Apple device, doesn’t mean these rules don’t apply to you—it just means you identify with different values, not better, different.  In modern culture, not associating with brands is nearly impossible and Apple’s choice to leverage that loyalty into one of the most profitable businesses in the world—the credit card business—is a prime example of this phenomenon.

The idea of a branded or store card is not new, of course.  Target itself offers the REDcard, for example. But the Apple card is something else.  They are not saying use our card at the Apple Store, they are saying use our card and Apple Pay at every store.  Apple, along with its partners Goldman Sachs and MasterCard, are leveraging Apple brand loyalty and their millions of customers to disrupt the payments business.  One simple app/user interface and a high-end card design will enable Apple to turn on another multi-billion dollar business.  And it seems their long game is to get people to stop using cards in general and just process through their phones, i.e. Apple Pay.  Just for shits and giggles, think about American Express, one of the most well-respected brands in the world, making a phone.  It would be ridiculous, no? ESPN, Facebook, and others tried and they all lost truckloads of money in the process.

The Apple Card is a powerful testament to the meaning of brand in the modern world.  Lisa Ellis, a credit card industry expert recently when asked about the Apple Card was quoted as saying the credit card industry is, “a very full and saturated market. The question is: What would make people go and get a new card?”  The answer is the same thing that has made them go out and get new iPhones for the last decade—“feelings, expectations, and culture”, aka brand.