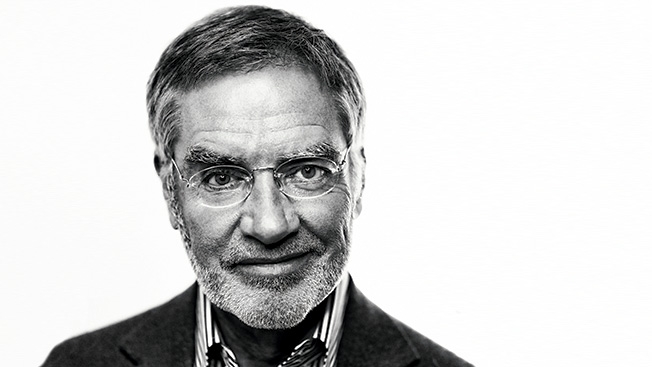 “Tell me more about how you encourage dissent….

Nobody’s in an ivory tower, and let’s figure this out together. Often in meetings, I will ask people when we’re discussing an idea, “What did the dissenter say?” The first time you do that, somebody might say, “Well, everybody’s on board.” Then I’ll say, “Well, you guys aren’t listening very well, because there’s always another point of view somewhere and you need to go back and find out what the dissenting point of view is.” I don’t want to hear someone say after we do something, “Oh, we should have done this.”

I want us to listen to these dissenters because they may intend to tell you why we can’t do something, but if you listen hard, what they’re really telling you is what you must do to get something done. It gets you out of your framework of the conventions of what you can and can’t do.

Lessons from mentors over the years?

I think if you get it right 50 percent of the time, you’re close to a genius. So you’ve got to be prepared to be wrong many times or most of the time. You need to have a bias toward very quick decision-making. If you make the wrong move, then quickly change it until you get it right. Whatever you’re going to do, do it quicker. If we can double up on time, we can do twice as much. Things don’t have to be perfect.

One thing I preach a lot here is, “Weed the garden.” If I try 10 new things and, just for example, let’s say two are clear winners and two are clear losers. That means I’ve got six in between. What do I do with those? Most organizations — and when I’m not careful, including me — let everything live except the clear losers. And what happens over time is that stuff in between doesn’t really help you. It takes up a lot of resources. It’s confusing. It’s muddy.

If you let that stuff build up — and with the next 10 things you do, there are two clear winners and six that are the gunk — then pretty soon my whole organization is basically mediocrity and gunk. So if you can bring yourself to say, “I’m only going to let clear winners live. I’m going to take the resources I put for the other eight things and try again,” you can keep a crisp organization. That’s why start-ups are so crisp — because they don’t have a lot of gunk yet. But over time, they often build up gunk. So we always talk about weeding the garden. Part of it is being honest with yourself. What really is a winner?

It does seem to be a persistent problem in a lot of organizations.

If you listen carefully, you’ll hear justifications for keeping certain things going. When you start saying things like, “This sort of helps with …” or, “Well, it does have a …” these are all the words that are clues that something is not a clear winner.

That’s the danger to an organization. It’s not your clear losers. It goes back to the idea of “don’t be afraid of mistakes.” You’ll make a lot of them. I think a lot of people only want to keep it at two mistakes out of 10, instead of eight out of 10, because they want to keep their batting average better. But nobody’s keeping score. If we’re keeping score, what kind of organization do we have? Are we succeeding a lot? Nobody’s counting how many mistakes you make.

People will ask me in interviews, “What are the biggest mistakes you’ve made?” I have no idea. I make mistakes all the time. I don’t count them. I don’t remember them. The beauty of a bad memory is I never feel so bad.

Somebody who takes a very long time to get to the point. Patience is not a virtue of mine. Urgency wins. There are times when people come in with a presentation, and I’ll say: “What is it you want from me? What is the decision?” I find 70 percent of the time, I don’t need to know any of the other stuff. I’ll just say, “Do this or that” and we’ve saved 50 minutes. Although it may come across as impatience, it really allows us to move faster. Or at least that’s my rationalization, and I’m sticking to it.”