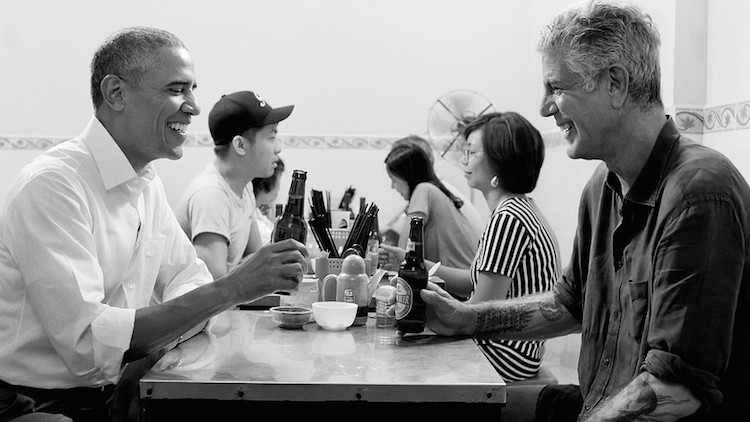 “As you move through this life and this world you change things slightly, you leave marks behind, however small. And in return, life — and travel — leaves marks on you. Most of the time, those marks — on your body or on your heart — are beautiful. Often, though, they hurt.”
- Anthony Bourdain

Friday morning, I got a text from my brother-in-law that said, “Dude. Anthony Bourdain :(.” To be honest, I had no idea what it meant, so I called him, and when he told me, I just replied, “F*ck.” Then I drove, and I teared up a bit. Then I worked out, and then I teared up a bit more. Then I went to work, and closed my office a few times and welled up a bit more. I find that when things like this happen, I don’t get immediately devastated, I just get numb. I think why? Why? Why? And then I forever change. I don’t know how I end up changing, nor am I aware while it’s happening, but it happens. I have some experience with suicide; one of my closest friends growing up hanged himself, just like Kate Spade and Anthony Bourdain did this past week. What a vicious act, especially to take toward yourself. Can you imagine hating yourself that much? To look at your eyes, your hands, your skin, and want them to be no more. Suicide is the most selfish act a person can take, but when you have children, it’s so far beyond selfish; it’s almost inconceivable. I know depression; I’ve seen it, I’ve felt it, and there’s no doubt, it sucks. You think you’ll never be right again. But in your heart, you know you’ll be right again. My mother described it perfectly: “a long-term solution to a short-term problem.”

To take one’s own life in such a vicious manner very clearly means you don’t want to live anymore. It’s a definitive act, not a cry for help. But Anthony Bourdain has been quoted as saying, “I have the best job in the world. If I’m unhappy, it’s a failure of imagination.” Well, I guess his imagination failed him, though this man didn’t seem to have a failure of imagination. If anything, he seemed to have an overabundance of imagination, of love, of caring, of excitement and passion for everything the world has to offer.

Bourdain was an inspiration to me. He completely changed the world of food journalism and commentary. He told the stories I wanted to hear, he gave me insight into a world I love, and he did it with a deep sense of imperfection. As I write this, I’m tearing up not exactly because of sadness but because of the multitude of joy, knowledge, and unvarnished honesty he shared with us. He was a friend and we were on a journey together. While his work started with food and always maintained a strong thread of food, drink, and the personalities involved, over the years, it evolved. It spread from the kitchen to the world of travel and from travel to politics. Bourdain became a vigilant voice for many without a voice, from kitchen workers to street-cart vendors in Third World countries and, most recently, for women and the #metoo movement. I can’t say I’ve recently engaged with his work as much as I used to, but that was because his voice created many others like his; it expanded the culture of restaurants and the service industry to rock star status. While he may have abhorred the idea of the celebrity chef, he very much had a hand in amplifying the romance and rock-star lifestyle of chefs. While he became known for many things, at his core it was as a storyteller, and like any great storyteller, he intensified the emotion behind his subjects, and that created an awe and desire within us, his audience. He made us feel like his friends, like we knew him. That’s why we all feel so sad.

But the truth is, we didn’t know him. We didn’t know what he was going through. We didn’t know how he felt about himself, why he did what he did, or how his grueling travel schedule and consumption habits impacted his mind and body. As he said, “Life is complicated. It’s filled with nuance. It’s unsatisfying… If I believe in anything, it is doubt. The root cause of all life’s problems is looking for a simple fucking answer.” Everything we go through, everything we see, everything we feel, is internal. We don’t know and never will know the experience of another human being, as much as we’d like to think we do. So I guess I need to stop wondering why, stop judging the experience of another, and deal with what I know.

Anthony Bourdain was an original voice.

His work made the world a better place. It brought us closer together. It made the world seem smaller and more alive. He loved eating, drinking, and watching his fellow chefs create. He was often very brave. He was passionate to a fault. He inspired many of us to be braver, to take steps to share more of ourselves with the world, including me. He loved. He overcame adversity. He was imperfect while being perfectly himself. And he left us all too early. It’s a darker, quieter, less enjoyable day without him here, but his work lives on for us all to enjoy.