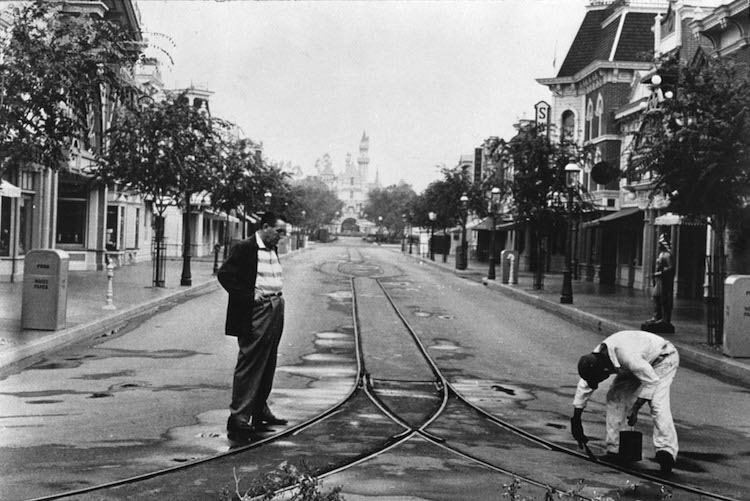 HOW WALT DISNEY MADE MAGIC REAL.

“There’s really no secret about our approach. We keep moving forward—opening up new doors and doing new things—because we’re curious. And curiosity keeps leading us down new paths. We’re always exploring and experimenting. At WED, we call it Imagineering—the blending of creative imagination with technical know-how.”
- Walt Disney

Lillian Disney could sense something big brewing in early 1952. It was one of those times, she would say, when “Walt’s imagination was going to take off and go into the wild blue yonder and everything will explode.” Walt began liquidating long-held family assets, borrowing against his life insurance policy, selling properties, and even selling the rights to his own name. Walt Disney was planning something new—he was planning to kick down the walls dividing his movies and real life.

When Disney’s children were very young, he’d tried to take them to places where their imaginations could run wild. But every carnival or fair seemed to be dirty, poorly run, and filled with vice. Walt wanted to create a place where people could take their family and forget the concerns of the everyday world—a place beautiful, safe, and filled with endless wonder. So at about the same time that he had started selling assets and conserving his capital, he pulled aside one of his art directors and had him begin working on concept sketches for a new kind of amusement park. The sketches started to illustrate the vision he had in his head, a utopian world where guests would enter a fairytale world.

Ever since his early days as a Kansas City artist and animator, Walt had a unique belief in the power of his thoughts. As time went on, he became expert at manifesting his dreams into physical forms, often creating the necessary technology as he went. But nothing prepared him for the challenge of manifesting Disneyland—taking the imaginary world of his movies and making it literally concrete. Disneyland would transport visitors into a captivating three-dimensional story, a sprawling material incarnation of a wonderland that began as a vision, then lived on screens.

Disney knew little about the experiential side of entertainment; his expertise and success was in storytelling through the mediums of animation, film, and television. To make his dream world a reality, Disney chose some of the studio’s most talented individuals, took a small building on the Disney lot, and formed a new company, WED Enterprises—an acronym for Walter Elias Disney. This interdisciplinary dream team would be tasked with creating the design, development, and construction of Disneyland—not only doing something that none of them had done before, but that no one had done before. They represented an extraordinary group of storytellers, engineers, animators, contractors, directors, writers, artists, set designers, lighting designers, sound engineers, and many others. WED employees would interpret the Disney stories by building beautiful sets and giving them the interactivity and resilience to wow thousands of guests daily.

The plans for the 160-acre site called for 5,000 cubic yards of concrete and a million square feet of asphalt. The designs included a replica of an 1800s main street, manmade riverbeds for steamboats and jungle cruises, a mile of railroad tracks, and a full-scale Bavarian castle. Walt was at the construction site pushing the WED team every day, giving his attention to every detail, every blade of grass, every leaf on every tree. As former Disney executive vice president and Imagineer Marty Sklar remembers, “The thing we worked so hard to avoid is letting people out of the story with discordant details…. Even the trash cans in the park are for that particular story or theme.” The attention to detail and level of execution were extraordinary. “His animations,” Sklar recalls, “created a perfect and artificial world, and what he was really doing was making that material in Disneyland. He always thought of Disneyland as a living animation, a living movie, and he thought that people would love to enter a film, not just watch it.”

Just like the final cut of a movie before it’s released to theaters, Disneyland had to be perfect. The day before the park opened, one crew was trying to dig out a 900-pound mechanical elephant that was sinking, another put lead weights onto a train so it wouldn’t tip over when riders came on board, and Walt himself spray-painted backdrops for the 20,000 Leagues under the Sea exhibit. No detail was too small. The park officially opened on July 17, 1955, with the biggest, most ambitious live-television broadcast ever. The next day, people began lining up to be first through the gates. Disneyland drew a million visitors in its first ten weeks; within two years it was drawing five million visitors annually. In 2017, it drew 18.3 million people.

The WED team—now known as the Imagineers—had combined their moviemaking acumen with hard work and ingenuity to prove firsthand what the watchers of their films had always believed—if you dream something, it can come true. They had transformed an orange grove into the Magic Kingdom by combining Walt’s purpose with a wealth of experienced creativity and flawless execution. The Imagineers had made the magic real.

Today, the Imagineers continue to combine their storytelling ability with innovative technology to create magic, holding over one hundred patents in special effects, ride systems, interactive technology, live entertainment, fiber optics, and advanced audio systems. Disney Theme Parks have introduced a multitude of technological landmarks such as Audio-Animatronics and computer-controlled thrill rides. While the Imagineers have an explicit mandate, tremendous resources, and the freedom to combine purpose, creativity, and execution that some creators may never have, it’s the simplified principles we learn from their work that matter most. What would happen if you were on a ride at one of the Disney parks and there was a glitch in the system? Or you had a poor food experience at one of the restaurants? Immediately, the glow they worked so hard to create would begin to fade. And that perspective applies to all creative endeavors. If you’re an amazing writer but you don’t spellcheck or post regularly on your blog, you aren’t executing. If you’re an amazing chef but you can’t scale your cooking to work in a restaurant, catering operation, or some meaningful platform for sharing, you aren’t executing. If you’re a filmmaker but can’t seem to complete a film, then you aren’t executing (and, really, you aren’t a filmmaker).

The fact is, your creative potential is unrealized without execution. You love Apple products not only because they’re beautiful, you love them because they work really well. You love your favorite restaurant not only because the food is great, but because it’s consistently great. A product, a brand, and even a person—think of your friends—whenever you have an interaction with one of these entities, they’re setting expectations. Whether or not they live up to those expectations determines whether you see them as good, bad, or indifferent.

Once again, our story comes back to the most simple human interactions. Do you provide more or less value than you promise? Do you live up to your commitments? Do you deliver on your promises? Are you a flawless executor? Or, as Bob Iger, chief executive of Disney said about Walt and his Imagineers, “Walt set a standard early on with the Imagineers. There was a standard that enabled people to come in expecting something and then giving something even beyond that. So they left thinking, how did Disney do that?” Walt Disney always lived up to his word, he always tried to exceed expectations, he always backed up his dreams with execution, and that’s why he was able to share so much of his creativity with so much of the world.

Note: The story about Disney and sublime execution comes with an asterisk. Your need to flawlessly execute must never come before your desire to create something truly special. More often than not, executors or operators overestimate the importance of mistake-free execution and sacrifice the soul of the idea or the purpose of the organization just to make sure the trains run on time. That’s never okay. Think of managing this process as if it’s a triangle: on the top of the triangle is Walt, the visionary; the Imagineers, the creatives, are in one of the angles; the Disneyland operations team are in the other. The job of the creator—in this case Walt—is to manage both sides of the triangle in order to ensure that the vision is never compromised. This is done by balancing the decision-making power and enabling an honest and open dialogue that ensures all decisions favor the preeminent manifestation of purpose.