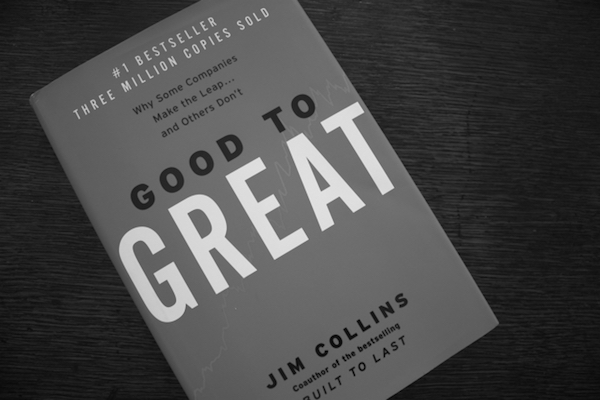 “Every good-to-great company had Level 5 leadership during the pivotal transition years. ‘Level 5’ refers to a five-level hierarchy of executive capabilities, with Level 5 at the top. Level 5 leaders embody a paradoxical mix of personal humility and professional will. They are ambitious, to be sure, but ambitious first and foremost for the company, not themselves. Level 5 leaders set up their successors for even greater success in the next generation, whereas egocentric Level 4 leaders often set up their successors for failure. Level 5 leaders display a compelling modesty, are self-effacing and understated. In contrast, two thirds of the comparison companies had leaders with gargantuan personal egos that contributed to the demise or continued mediocrity of the company. Level 5 leaders are fanatically driven, infected with an incurable need to produce sustained results. They are resolved to do whatever it takes to make the company great, no matter how big or hard the decisions. Level 5 leaders display a workmanlike diligence—more plow horse than show horse. Level 5 leaders look out the window to attribute success to factors other than themselves. When things go poorly, however, they look in the mirror and blame themselves, taking full responsibility. The comparison CEOs often did just the opposite—they looked in the mirror to take credit for success, but out the window to assign blame for disappointing results.”
- Jim Collins, author Good to Great

When I graduated college and commenced my professional journey I quickly realized there was a lot I did not know.  While I lightly considered continuing my education, I was earning good money and was tired of traditional schooling. I wanted to get to work.  So I began to round out my skill set and teach myself through reading, and the trial and error of experience.  I rapidly consumed books, many times late into the night. My choices ranged from Public Relations for Dummies, to historical business chronicles like Barbarians at the Gate, to business philosophy books, including The Dip by my rabbi Seth Godin. None of these books, though, have had the ongoing impact of Good to Great: Why Some Companies Make the Leap…and Others Don’t, by Jim Collins. Not only did it have one of the most amazing titles in the history of books, Good to Great provided a reliable blueprint for what it took to go from average to awesome.

Good to Great is based on a research study in which Collins and his team identify “companies that generated cumulative stock returns that beat the general stock market by an average of seven times over fifteen years, better than twice the results delivered by the companies considered the world’s greatest, such as Coca-Cola, Intel, General Electric, and Merck.” Keep in mind this book was released in 2001.  Once the companies were identified, Collins and his team studied the practices of each organization and extracted seven key competencies the companies shared.  Over the last fifteen years I have continually returned to this book to check myself against those competencies, and ensure that I am doing my best to make decisions aligned with these findings.  With this in mind, I felt compelled to share these competencies with you, as it seems this great business book no longer has the visibility it once had.

The Seven Key Competencies of Good to Great Companies

While everyone has the desire to do something great, it turns out much of what the media promotes about how to reach greatness is misleading. What Good to Great explains so well, and backs up through quantitative research, is the true path.  When irrational exuberance takes over, it is incredibly sobering to remind yourself that the true path to greatness is a combination of disciplined people, thought, and action.

We must remember that every good-to-great leap began with a Level 5 leader who motivated the enterprise more with inspired standards than inspiring personality.  We can and should all aspire to apply that unique blend of personal humility, incredible ambition, and indomitable will to a cause greater than ourselves.