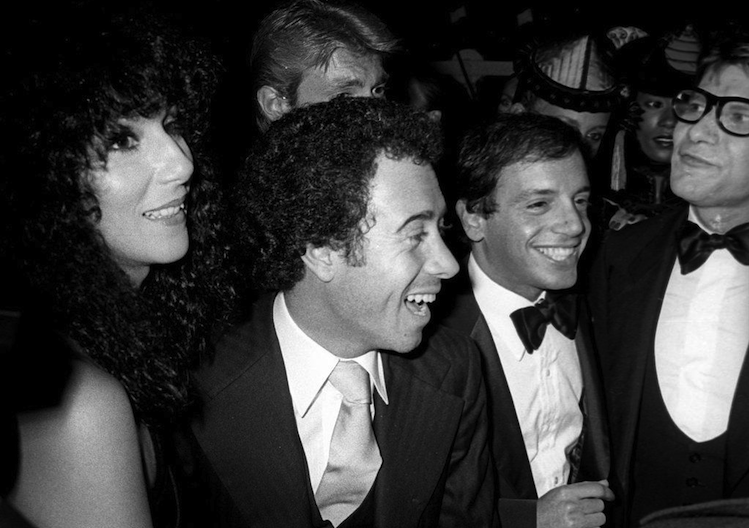 “Happy is harder than money. Anybody who thinks money will make you happy hasn't got money.”
- David Geffen

David Lawrence Geffen is an American business magnate, producer, film studio executive, and philanthropist. Geffen created or co-created Asylum Records in 1970, Geffen Records in 1980, DGC Records in 1990, and DreamWorks SKG in 1994. His donations to the David Geffen School of Medicine at UCLA and other educational and research donations have widened his fame beyond the entertainment industry.

David Geffen was born in Borough Park, Brooklyn, New York, to Abraham Geffen and Batya Volovskaya. Geffen’s mother owned a clothing store in Borough Park called Chic Corsets by Geffen. Both of his parents were Jewish immigrants who met in British-mandated Palestine and then moved to the United States. Geffen graduated from Brooklyn’s New Utrecht High School in 1960 with a 66 percent average. He attended the University of Texas at Austin for a semester, and then Brooklyn College, before again dropping out. He then moved to Los Angeles, California to find his way in the entertainment business. He attended Santa Monica College (then known as Santa Monica City College) in Santa Monica, California, but soon left. Geffen attributed his challenges in school to dyslexia.

After a brief appearance as an extra in the 1961 film The Explosive Generation, Geffen began his entertainment career in the mailroom at the William Morris Agency (WMA), where he quickly became a talent agent. In order to obtain the WMA job, he had to prove he was a college graduate. As he later reported in an interview, he claimed in his job application at WMA that he had graduated from the University of California at Los Angeles (UCLA). Because he worked in the mailroom, Geffen was able to intercept a letter from UCLA to WMA which stated that he had not graduated from UCLA. He modified the letter to show that he had attended and graduated, then submitted it to WMA.

His colleagues in the mailroom included Elliot Roberts, who later became Geffen’s partner in a management company. Geffen left William Morris to become a personal manager and was immediately successful with Laura Nyro and Crosby, Stills and Nash. When Geffen was engaged in the process of looking for a record deal for young Jackson Browne, Atlantic Records founder Ahmet Ertegün suggested that Geffen start his own record label.

Geffen founded Asylum Records in 1970 (with Elliot Roberts) after Geffen was unable to get Jackson Browne a record deal anywhere else. The name Asylum was chosen because of the owners’ reputations for signing artists who would struggle to find a record company that would contract with them. The label was distributed by Atlantic Records at this time. Asylum signed artists such as the Eagles, Joni Mitchell, Bob Dylan, Tom Waits, Linda Ronstadt, Warren Zevon, Judee Sill, and J.D. Souther. Asylum was later acquired by Atlantic’s parent company, Warner Communications, and merged with Elektra Records in 1972 to become Elektra/Asylum Records.

Geffen remained in charge until December 1975, when he went to work as vice chairman of Warner Bros. film studios. He then retired and in 1977 was informed (erroneously) that he had cancer. During his retirement period he spent a short time (the fall of 1978 and spring of 1979) teaching a noncredit seminar on the music industry and arts management at Yale University, where he featured classroom guests Jackson Browne and Paul Simon. In 1980 a new medical diagnosis revealed the error in the original diagnosis and Geffen was given a clean bill of health, whereupon he decided to return to working in the entertainment industry.

In 1980, he founded Geffen Records and recruited Warner Bros. Records exec Ed Rosenblatt as president. The Geffen label’s meteoric rise to prominence within the year proved a bittersweet success. Geffen’s first artist to sign on was Donna Summer, who was anxious to leave Casablanca/PolyGram Records. Geffen shortly after released her The Wanderer album, the lead single of which reached #3 on the Billboard Hot 100, and the album certified gold. Casablanca countered by releasing more singles off her 1979 Bad Girls album such as the song Walk Away and a similarly named hits compilation to compete, but by then New Wave sound was dominating the airwaves.

The November 1980 release of John Lennon’s album Double Fantasy seems an impressive feat for a new label, but at the time Lennon stated that Geffen was the only one with enough confidence in him to agree to a deal without hearing the record first. Yoko Ono, Lennon’s wife and partner, stated that Geffen was the only label head to pay attention to her. In December 1980, Lennon was murdered and Double Fantasy became a massive seller. Over the years Geffen Records/DGC has become well known as a label, releasing works by the likes of Olivia Newton-John, Asia with Steve Howe and John Wetton, Elton John, Cher, Sonic Youth, Aerosmith, Whitesnake, XTC, Peter Gabriel, Lone Justice, Blink-182, Guns N’ Roses, Nirvana, Lifehouse, Tyketto, Pat Metheny, Sloan, the Stone Roses and Neil Young.

The label was distributed by Warner Bros. Records since its inception but, in 1990, the label was sold to MCA Records. Geffen continued to run the label before leaving Geffen Records in 1995. The Geffen label is today is part of the Interscope-Geffen-A&M division of MCA’s successor, Universal Music Group, formed as the result of the 1999 merger between the MCA and PolyGram families of labels.

Through the Geffen Film Company, Geffen produced dark-tinged comedies such as (the 1986 version of) Little Shop of Horrors, Risky Business and Beetlejuice. Geffen was the Broadway backer for the musicals Dreamgirls and Cats. In 1994, Geffen co-founded the DreamWorks SKG studio with Steven Spielberg and Jeffrey Katzenberg. In 2008, Geffen left DreamWorks.

“Happy is harder than money. Anybody who thinks money will make you happy hasn’t got money.”

“I’ve always thought that each person invented himself… that we are each a figment of our own imagination. And some people have a greater ability to imagine than others.”

“I have no talent except for being able to enjoy and recognize it in others.”

“Most of the artists were trying to make a living, trying to get laid, trying to figure out who they were. They weren’t trying to change the world. That’s what other people put on them. I knew all those people. I knew them all, intimately and well. Bob Dylan. I would say that Bob Dylan is as interested in money as any person I’ve known in my life. That’s just the truth.”

“The concept known as bal tashchit–‘Do no destroy’–has a special significance in Jewish tradition…We are constantly being warned in our faith that the capricious, thoughtless, wasteful destruction of the elements and creatures of the earth is wrong…We should remind ourselves daily of our responsibility to all aspects of creation.”