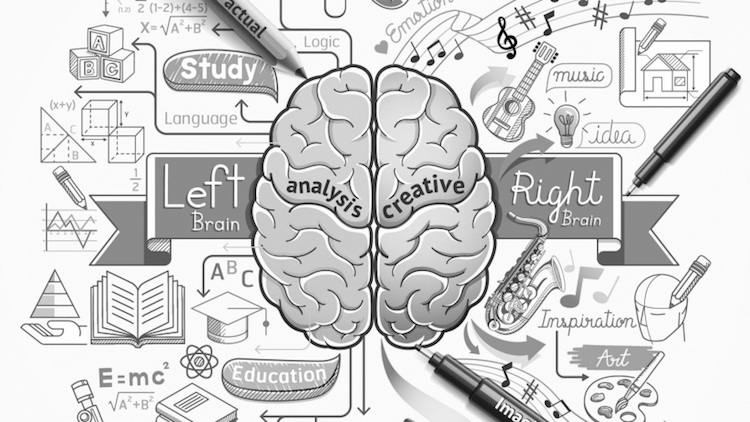 “Lawyers. Doctors. Accountants. Engineers. That’s what our parents encouraged us to become. They were wrong. Gone is the age of “left-brain” dominance. The future belongs to a different kind of person with a different kind of mind: designers, inventors, teachers, storytellers —creative and emphatic “right-brain” thinkers whose abilities mark the fault-line between who gets ahead and who doesn’t.”
- Dan Pink, Author & Speaker

Your left brain is logical, linear, by-the-numbers; the right side is creative, artistic, empathetic. Oprah Winfrey talks with Daniel Pink about his groundbreaking book, “A Whole New Mind”, and explores how right-brain thinkers are wired for 21st-century success.

The best part: Anyone can tap into the right mind-set.

Pink, a former chief speechwriter for former Vice President Al Gore, presents a convincing argument that our country is entering a new era — the so-called conceptual age — during which right-brained skills such as design and storytelling will become far more crucial than traditionally left-brained skills such as accounting and computer programming.

While the latter skills are readily outsourced, transformative abilities such as empathy and creativity are crucial in a new age “animated by a different form of thinking and a new approach to life,” he writes.

Because I’ve always been a right-brain kind of person — more of an inventive and empathetic storyteller than a linear, logical number cruncher –this book really spoke to me. Now, you know what happens when something new excites me: I want to share it with as many people as I can.

In June 2008, I was invited to Stanford University to give the commencement address (my goddaughter Kirby was among the graduates).

After finishing Daniel’s book, I ordered 4,500 copies, one for each student in Stanford’s class of 2008. I wanted to present them (along with another of my favorites, Eckhart Tolle’s A New Earth) as graduation presents. For four days straight, a team of people tied ribbons around the books, which were waiting on their chairs. Watch Oprah’s Duke University address on Sunday on Oprah.com or CNN.com.

When we sat down in the studio in Chicago, I told him the story of my ribbon assembly line. “That’s the kind of work we typically try to outsource!” Daniel joked. In “A Whole New Mind,” he explains that one of the trademarks of the Conceptual Age is the outsourcing of traditional white-collar jobs such as law, accounting, and engineering to less-expensive overseas workers, particularly in Asia. But as he points out, you can’t outsource creativity.

Feel left out? Fear not, Daniel says: He has identified six right-brain-associated aptitudes that he believes anyone can develop, and tells us how we can use these skills not only to stay competitive in the workplace but to improve our lives and our world.

Winfrey: Let’s start with the bold statement you make on the cover of your book: Why will right-brainers rule the future?

Pink: In many professions, what used to matter most were abilities associated with the left side of the brain: linear, sequential, spreadsheet kind of faculties. Those still matter, but they’re not enough.

What’s important now are the characteristics of the brain’s right hemisphere: artistry, empathy, inventiveness, big-picture thinking. These skills have become first among equals in a whole range of business fields.

Winfrey: Does this mean that left-brainers are going to be out of work?

Pink: Not necessarily — but it does mean that people like me have some work to do. I happen to be extremely left-brained; my instinct is to draw a chart rather than a picture. I’m trying to get my right-brain muscles into shape. I actually think this shift toward right-brain abilities has the potential to make us both better off and better in a deeper sense.

Winfrey: You write that after living through the agricultural, industrial, and information ages, we’ve entered the conceptual age, in which creators and empathizers will lead. How have what you call the three A’s — abundance, automation, and Asia — ushered in this new era?

Pink:In the same way that machines have replaced our bodies in certain kinds of jobs, software is replacing our left brains by doing sequential, logical work. And that brings us to Asia, to where that work is being shipped. In Asia you have tens of millions of people who can do routine tasks like write computer code. Routine is work you can reduce to a spreadsheet, to a script, to a formula, to a series of steps that has the right answer.

Winfrey: So you suggest that right-brain aptitudes, when complemented with left-directed thinking, can result in a whole new mind. Because we’ve entered a conceptual age, where meaning and harmony, design and purpose are going to be more significant to the world than formulaic thinking and activities. After I read your book, I thought, ‘This is my time.’

Pink:That’s how a lot of people have responded: that the world has come to them. In this country, the “smart” people have these logical, linear abilities, while right-brain people are often seen as flighty, spacey, artsy-fartsy.

Winfrey: They’re viewed as being “woo-woo.”

Pink:Yes, exactly! I’m not much of a woo-woo guy, so when I used my left brain to look at the facts, it became clear that the scales are tilting. My generation’s parents told their children, “Become an accountant, a lawyer, or an engineer; that will give you a solid foothold in the middle class.”

But these jobs are now being sent overseas. So in order to make it today, you have to do work that’s hard to outsource, hard to automate.

Ultimately, here’s what is heartening: The right brain is finally being taken seriously. The Dalai Lama is doing joint projects with neuroscientists. People like Dr. Jill Bolte Taylor [the Harvard-trained brain researcher who chronicled her stroke in the book “My Stroke of Insight”], who have incredible street cred in neuroscience, are offering their stories. Oprah.com: Jill Bolte Taylor explains her stroke of genius

Winfrey: So what advice do you give kids who are in school?

Pink:Ultimately, it’s about following your intrinsic motivation. What are you here to do? What are you uniquely good at?

Winfrey: Let’s talk about a right-brain ability you think we should all develop.

Pink:I’d say “design.” Design is the ability to create something that has significance as well as usefulness. Even hospitals are bringing in designers to redo waiting rooms.

A young designer in New York re-created the prescription bottle because she noticed that her grandparents were getting their medications confused. She put the medicine’s name in large type at the top instead of the doctor’s name, and Grandpa gets a green band on his medicine bottle and Grandma gets a yellow band so they can see the difference more clearly. That’s an example of how design can literally save lives.

Winfrey: How do we begin to create more design in our lives?

Pink:Carry a notebook and write down examples of good and poor design. After a week, you’ll begin to realize that nearly everything is the product of a design decision. The type of lid you put on the cup of coffee you bought this morning was a design decision. So were the shoes you’re wearing.

Winfrey: Another right-brained skill you talk about is “story.”

Pink:We live in a world where facts are everywhere. If we wanted to know the gross domestic product of Ecuador, my kids could find that online in 15 seconds.

What matters more now is the ability to put facts into context and deliver them with emotional impact. And that’s what a story does. We have in our head something called story grammar.

We see the world as a series of episodes rather than logical propositions; when your spouse asks, “How was your day?” you don’t whip out a PowerPoint presentation and a pie chart. Instead, you narrate: “First, this happened, and you’ll never believe what happened after that…,” and so on.

In our serious society, storytelling is seen as being soft. But people process the world through story. Companies are now using a product’s backstory as a way to differentiate items in a crowded marketplace.

Winfrey: Of course, I have a great affection for story because I make my living telling others’ stories. Story is a way to build connection.

Pink: Amen. That’s why business schools are slowly starting to recognize the power of narrative — if you want to lead an organization, you have to be effective in creating a compelling vision with a beginning, a middle, and an end.

Winfrey: Tell me about the skill you call “symphony.”

Pink:Symphony is the ability to see the big picture, connect the dots, combine disparate things into something new. It’s a signature ability that is a great predictor of star performance in the workplace. Visual artists in particular are good at seeing how the pieces come together.

I experienced this myself by trying to learn to draw. The teacher showed us how to see proportions, relationships, light and shadow, negative space, and space between space — something I never noticed before!

In one week, I went from not knowing how to draw to sketching a detailed portrait. It literally changed the way I see things; now I view the world in a much more holistic, symphonic way.

Winfrey: What about the right-brain ability you mention in your book, “play”? I’ve got to get better at play.

Pink:Me too. One aspect of play is the importance of laughter, which has physiological and psychological benefits. Did you know that there are thousands of laughter clubs around the world? People get together and laugh for no reason at all!

Winfrey: Isn’t it kind of pitiful? You don’t have anything really to laugh about so you go to a club, you have a meeting to laugh?

Pink: I realized that it’s not about laughing at a joke; it’s about the physicality of laughing. It’s laughter yoga, or a kind of meditation. Even as the left brain is thinking, ‘What the heck are you doing?’ the right brain says, ‘Be quiet — this is cool.’ So I started doing it.

Winfrey: It’s nearly impossible to say “ho-ho-ha-ha-ha” and not at least smile! Let’s move on to another right-brain skill you mention in your book: “empathy.”

Winfrey: Yes. And finally, there’s the capacity you call “meaning.” Isn’t meaning the common denominator of human experience? Over the years while doing my show, I’ve learned that we all want to be validated, to know that what we say matters, that it means something. We all want to feel as if our lives have been significant and purposeful.

Pink: This is why I think baby boomers are going to do something quite spectacular. They say, “Sixty’s not old. Oh, I’ve got 25 years left.”

Then they look back 25 years and say, “Holy smokes, that sure happened fast. Are the next 25 years going to happen as fast? And if they are, what’s my legacy going to be? When am I going to live my best life? What kind of imprint am I going to leave on the world?”

Roughly 100 baby boomers turn 60 every 18 minutes in this country. Imagine the collective force of that. So I think that this widespread search for meaning is one of the most important things going on in American life today.