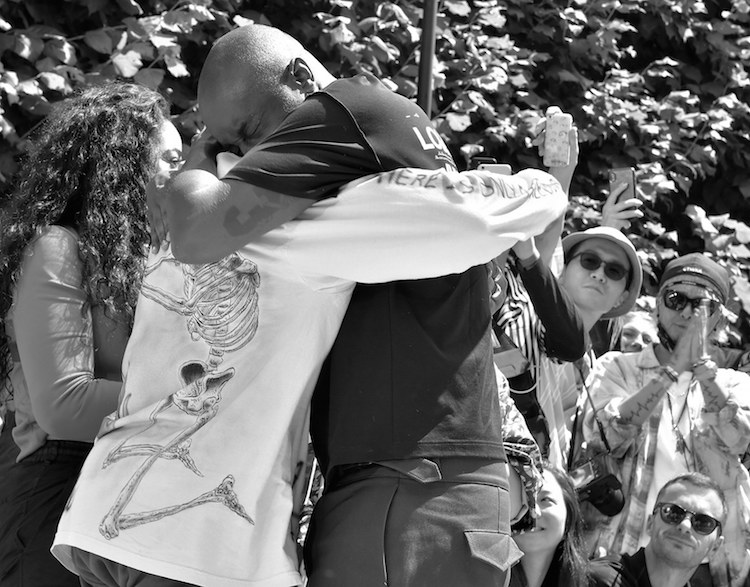 From the NY Times: On the afternoon before Virgil Abloh debuted his men’s wear collection for Louis Vuitton — an event that drew 1,000 seated guests; an additional 1,500 specially invited students; a truckload of the designer’s global celebrity pals, boldface names like Kim Kardashian West and Kanye West, Rihanna, ASAP Rocky, Alexander Skarsgard and Rita Ora; and a handful of Chinese pop stars with social media followings numbering in the multiple millions — a flash mob gathered at Vuitton headquarters on the Right Bank near the Seine.

Tandem teams of messengers hauled in flower arrangements for the designer, so many that the reception area began to look like a wedding hall. Assistants from a 35-member men’s wear team did frenzied, last minute fittings on a model. The Japanese artist Takashi Murakami — one of a laundry list of global creatives whom Mr. Abloh counts among his collaborators (the two have an exhibition scheduled to open Saturday at the Gagosian Gallery here) — drifted through the space, followed close behind by a posse of assistants wearing Comme des Garçons rags and surgical face masks.

The young American influencer Luka Sabbat darted around, hauling a big Louis Vuitton shopping bag over one shoulder. And Ian Connor, the tattooed Instagram phenom (@ianconnorsrevenge) whose self-assurance may out-scale even his million-strong Instagram following, scrolled through his phone feed, barely bothering to notice that Naomi Campbell had wandered in, clad in sneakers and leggings, to perform a supermodel gavotte — trailed, as always, by her entourage.

“This is the culmination of a lifetime of work,” said Mr. Abloh, who, at 37, effectively pinnacled the luxury-goods Everest with his appointment in March as men’s artistic director of Louis Vuitton.

“Look around this room,” added the designer — a child of Ghanaian immigrants, a suburban kid raised outside Chicago, a trained architect less notable for any specific design skills than for his masterful ability to manipulate social media. “There are people around this room who look like me,” he added. “You never saw that before in fashion. The people have changed and so fashion had to.”

By people Mr. Abloh meant consumers, of course, and the change he has ushered in represents fundamental shifts not only in who buys things but also in who gets to tell the story of fashion.

Fashion, as Stefano Sassi, the chief executive responsible for the turnaround of Valentino, recently noted in Milan, is above all a narrative business: “It’s not the sneakers you’re selling, it’s the perception and the dream.”

In former times the dominant narratives were handed down from on high to a waiting public by a succession of designers. If Mr. Abloh’s hiring proves anything, it’s that the old models have lost their validity; the cult of the Great Creative is dead. Gone are the mood boards, the Yves Saint Laurent-style mood swings, the lap dog press and all the hoary antique apparatus of the business.

Though a secular saint here, Mr. Saint Laurent probably could not get arrested in the new global digital marketplace, one in which the consumer is the presiding genius and the author of a story that increasingly epitomizes aspects of Adam Smith’s free market doctrine.

In the advancing digital age, being has been substantially replaced by consuming and that act itself has devolved from anything closely related to need or pleasure into a performative existential gesture. Consider the case of Mr. Connor, the New York-born, Atlanta-raised 25-year-old whose social media tentacles reach millions on Tumblr, Twitter and Instagram. “Even if I didn’t have a home, I was sleeping on the floor, I always made sure I had my clothes,” Mr. Connor once said.

Unquestionably, along with his skill at upending fashion’s exclusionary tropes, it was Mr. Abloh’s ability to connect to people like Mr. Connor and the global digital tribes that the designer referenced in a show, held in the arcaded courtyard of the 17th-century Palais Royal, that led Louis Vuitton to him. “Fashion has to speak to a generation of people who look like me,” he said.

Accordingly, his Vuitton show featured a cast of ethnically diverse models (and also musicians like Kid Cudi, Playboi Carti and Theophilus London) that would have been inconceivable on a Paris runway as recently as five years ago. And yet, if there is little reason to question Mr. Abloh’s sincere dedication to diversity, there is somewhat less incentive to imagine the same of Bernard Arnault, the French magnate who owns Vuitton as part of his LVMH Moët Hennessy Louis Vuitton luxury empire.

It’s worth noting that suddenly the catwalks here and, before Paris, in Florence and Milan featured unprecedented numbers of models of color. Designers in all those cities were quick to point out the change, noting how their runways now featured castings variously described to this observer as “exotic” or “colored” or “immigrant.”

There are vast new millennial markets to exploit in China (400 million) and India (385 million), Asia representing 19 percent of the global generational cohort, according to demographers at the Pew Research Center, followed closely by sub-Saharan Africa with roughly 13 percent. (Only a slowly aging Europe remains underweight in terms of pure population.)

The goal is getting at them; the surest route, the internet; and the odds are on the internet and the affable, easygoing Mr. Abloh knowing how.

Evidently he does. Titling the Vuitton show “We Are the World,” a reference to the 1985 charity single in support of Ethiopian famine relief, the designer included with his show notes maps detailing the global origins of each member of the cast.

On a radiantly sunny afternoon, he quickly put to rest any doubts about his design abilities — “People think I’m just that guy who puts a stripe on a hoodie,” he’d said earlier, at his studio — with a demonstration of his design conviction, opening with a suave double-breasted suit worn over double-pleated trousers precisely when most men’s wear labels are in desperate flight from tailored clothes.

This being Vuitton, it was paired with matte white crocodile sneakers and a tote. “Why do you guys even make clothes?” was the first question Mr. Abloh asked when he was hired by a house that originated as a luggage maker. “Accessomorphosis” was the term he then coined to fuse apparel with the accessories that drive Vuitton sales.

Why carry a wallet or strap on a fanny pack or burden yourself with a card holder when you can attach it to a harness, a holster or a multi-pocketed gilet? Sure you could see in those hybrid accessories a nod to ’90s Helmut Lang (a designer once described as the Type O of fashion: its universal donor.) And you could discern in the shifting volumes — flowing suits played off tautly snug ones — elements reminiscent of screen grabs from Pinterest pages devoted to vintage Armani.

Yet all of these came neatly balanced by components from a very personal vocabulary Mr. Abloh honed at his own label, Off-White: transparency, asymmetry, ineffable skate-rat cool. Perhaps, as some suggested, the romanticism of sequined jacket prints depicting Dorothy Gale asleep on a bed of roses (not far from Oz) were a reference to Mr. Abloh’s belief in pursuing one’s dream, but they also underscored the Midwestern gumption he shares with that girl from Kansas.

In conversation with this reporter last year in Milan, Mr. Abloh uttered what you might call a personal credo, one applicable to anyone determined to reach a goal. “I never mind when people turn me down, because I immediately start looking for solutions,” said Mr. Abloh, who appears to have attained his at Vuitton. “I always love that first no.”

Virgil Abloh is a Ghanaian-American fashion designer who has been the artistic director of Louis Vuitton’s men’s wear collection since March 2018. Apart from his work at Louis Vuitton, Abloh serves as the chief executive officer of the Milan-based label Off-White, a fashion house he founded in 2013 . Born in Rockford, Illinois to Ghanaian parents, he graduated from the University of Wisconsin–Madison in 2002 and the Illinois Institute of Technology in 2006, with degrees in civil engineering and architecture, respectively. He entered the world of fashion with an internship at Fendi in 2009 alongside rapper Kanye West. The two began an artistic collaboration that would launch Abloh’s career into founding Off-White. Time magazine named him one of the 100 most influential people in the world in 2018.

“It’s up to us to be prolific and to leave remnants of our current time to describe our generational input. That’s my sort of inspiration and motivation. We’re all sort of one despite different cultures and nationalities, which is very poignant in terms of today’s climate. There’s an international generation growing up idolizing the same clothes, listening to the same music, and that hasn’t always been the case. These products are sort of our hope to be timeless and add something to that pillar of design.”

“Everything I do has a deeper meaning. It follows my philosophy of finding the balance between a tourist and a purist. There are people that live and breathe and study design, furniture, graphic design, fashion. And then there’re people that just enjoy it. I like to make things that fall in the space for both, so on the surface level, there is an allure or a reason to look at it, but there has to be something on a deeper level. When I use quotes, it’s challenging convention. What’s a “chair,” or what’s a “rug,” “display case,” “bed”? It’s me using irony in a specific way. It’s my voice, a way to distinguish a repeated product without putting my name on it. It lets a viewer reanalyze or question the fact. Is a rug a rug? Is a bag a sculpture? It allows me to rewire and remessage, and consistently find “me” in my work.”