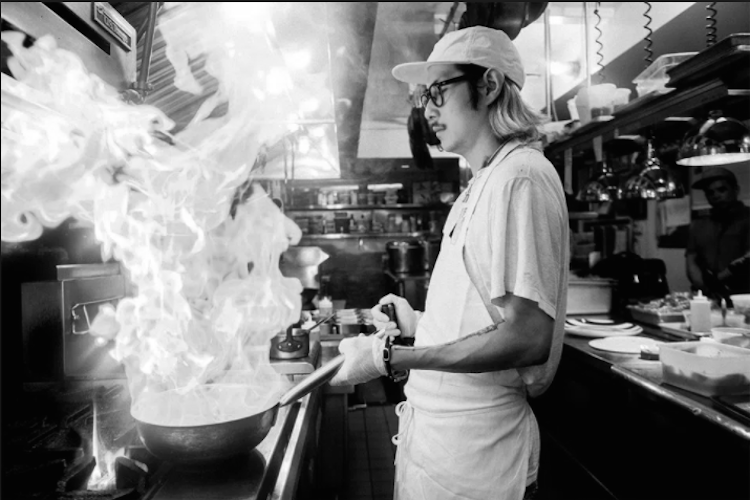 It was October 2013 and chef Danny Bowien had just received word that his restaurant in Manhattan, Mission Chinese, had been shut down by the health department for an array of violations, including an infestation of mice. Overwhelmed, embarrassed, and worried about his employees, Bowien, the rock star rising chef, didn’t know what to do.  It was then that his phone rang. René Redzepi, the chef behind the best restaurant in the world, Noma, and Danny’s close friend, said, “Chef, are you ready? They’re coming for you. They smell blood. You’re hurt, you’re wounded and they’re going to come for you.”

Bowien’s issues didn’t end there. At the same time, he was in the midst of opening the Lower East Side taqueria Mission Cantina.  The health department issues distracted him and he canceled a crucial research trip to Mexico.  He opened Cantina before it was ready and the reviews weren’t good.  Even Redzepi sent him an email saying his tortillas needed an upgrade.  After a stretch of being celebrated by peers and customers alike, the world of the once rising-star chef was crumbling.

Redzepi coached Bowien through his challenges, telling him, “…everything’s going to be O.K., but you’re going to need to handle this. You’re going to be fine, but you just need to focus.” His encouragement, combined with tough love from his close friend Momofuku chef David Chang, spurred Bowien into action.  Despite resolving his issues with the health department, Bowien shuttered the original New York Mission Chinese and set out to start over in a newer, better location.

Bowien came to terms with his adversity and the realization that it had been his own fault.  “I got swept up in the whole thing,” he said. “Doing events everywhere, getting flown all over the world, not being in the restaurants enough. At the end of the day, my time is best spent in the restaurants. This is what got me here.”  He retrenched, focused, and started spending all his time in the kitchen.  He gave up alcohol, once his regular companion, and his wife gave birth to a baby boy, Mino.  The challenges that once could have destroyed him instead were compelling him to rebuild, a stronger, better Danny Bowien would make a stronger, better Mission Chinese.

After over a year of hard work, Bowien reopened Mission Chinese in 2014.  The original restaurant had sported a beer keg on the floor and was thrown together and cramped.  His new location was more civilized, maintaining the edgy, creative energy people expected from him, but through a more refined expression and ambiance.  The reinvented Mission Chinese is like an artist’s work later in his career, self-assured and polished.  He’s now in the kitchen from 7 a.m. to 2 a.m. seven days a week, focused on his craft and his fatherhood, not his fame.  And it shows in the results; the new Mission has snagged three stars from New York magazine, two stars from the New York Times, and is consistently ranked as one of the best restaurants in the biggest city in the world.  Just as important, the restaurant is flourishing, with more business than it can handle.

Danny Bowien transformed his challenge into an opportunity.

But what do you do when you encounter a major challenge?  Most of us have similar reactions to Danny Bowien: panic, anxiety, and fear.  The possibilities of what might happen, the worst-case scenario, become overwhelming and paralyze us.  Robert Downey Jr. explained it best when he said, “worrying is like praying for what you don’t want to happen.”

But what if you shifted your perspective and realized that the word possibilities inherently means many different outcomes are possible, both good and bad.  That challenges are actually just as likely to become opportunities.  Whether they’re one or the other is completely determined by your perspective and approach.  If you zig when everyone else zags, remaining positive and proactive while others panic, challenges quickly transform into opportunities to rise.

This thought process is one of the major differences between the people who achieve unbelievable success and the ones who don’t.  A self-fulfilling prophecy occurs when a person or organization unknowingly causes a negative prediction to come true because they expected it to.  Magic-makers are different because they make self-fulfilling prophecies positive, using the power of affirmative thought as a tool to impact their reality.