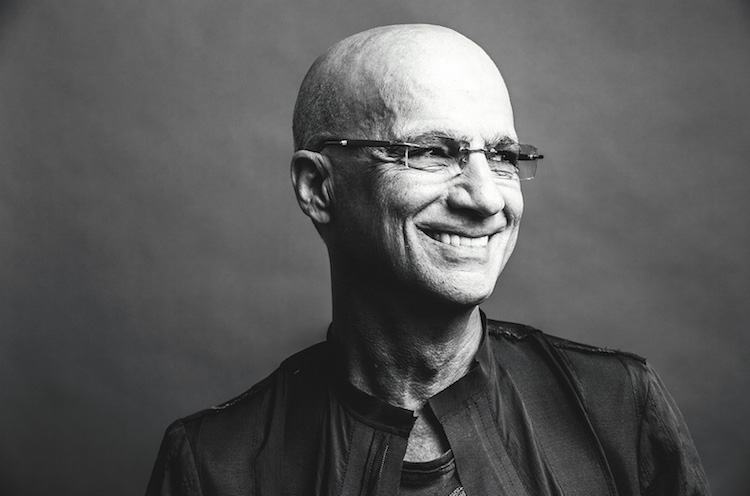 “You have talent, you give them the keys and let them drive.”

“Fuck sneakers, you should do speakers.”

My father was the guy in my life. One of the greatest things he ever told me was “You know how stuff works, Jimmy? When the cat’s bigger than the shit, you keep the cat. If the shit gets bigger than the cat, out goes the cat.” That’s how I speak. I got it from him.

My father was a longshoreman. He sat at the Italian-American longshoremen’s club in Brooklyn. The guys that worked in the neighborhood would say to him, “Where’s your son going?” “He goes to the studio.” “What does he do in the studio?” And my father said, “My son has magic ears. He can hear what you’re thinking.”

Another thing he said: He constantly told me, “Every room that you walk into is better off that you’re there.” He didn’t say it every day, but he said it often, in between “Your hair is too long.” But that’s who he was, and I think that gave me the confidence to walk into some of those rooms early on, when I didn’t really have any skills.

People are willing to help me for reasons that still remain a mystery.

My first solo flight with John Lennon. We’re talking casually and he asks, “Why’d you get into this? Why music?” So I thought about it and said, Okay, okay, okay, I got to fucking answer this question, right? So I said, “You know, John, I saw you guys on Ed Sullivan and it was incredible. My friends, everybody felt the same. And then I saw the Rolling Stones a little later and I thought, I want to be part of this. I thought of a band but, you know, the band wasn’t really good, so somebody gave me a job here.” He goes, “That’s cool.” And I said, “John, why did you do it?” And he says, “To get laid.” And I felt completely ridiculous, because that’s why I did it!

You know that time when you wake up, you slept just enough, you ate just the right thing the day before, and you wake up and go, Wow, I feel amazing today? No matter what hits you, you can take at least the first ten punches? That’s peace.

Bruce Springsteen’s manager, Jon Landau, hired me to do Born to Run. They had a lot of faith in me. I was twenty-one at the time or something like that, and the album was really successful. And so they hired me for the follow-up album, which was Darkness on the Edge ofTown, and we go in and we start recording the drums. We get this drum sound—but then we move studios, and we can’t get the drum sound back. It’s weeks on the same boom-boom on one drum. And Bruce keeps saying, “I can hear the stick.” And I would look at him and say, “It is a stick,” you know? At some point, Little Steven says he knows this guy in New Jersey that can help get the drum sound. I get mortified and insulted, and I go see Landau in the hotel. I said, “Jon, I quit. Fuck this.” And Landau said, “Let’s just talk for a second. I’m going to try to teach you something now, at what could be a crossroads in your career.” He said, “This is not about you. This is about Bruce’s album and making the best album we possibly can.” And he stopped me in my tracks and said, “I want you to go in there and I want you to say to Bruce, ‘I’m going to support you no matter what.’ Bruce will remain your ally throughout the rest of your career. You don’t just walk out because you think someone has insulted you and your pride has been hurt.”

So I listened to him, because I was always good at learning. I could hear people and the messages they were sending. We got the drum sound somehow, and six weeks later Bruce gave me “Because the Night” to record with Patti Smith, which really launched my career. And that just was like ink on a shirt. You know, it just took. The rest of my career I approached like that. I just take a step back, don’t buy my own bullshit. Just look at the work. That lesson is the most powerful lesson I ever learned. It goes against human instinct.

A lot of the time I feel that as human beings, we’re not meant to have perspective. It’s almost the opposite.

We’re built to move on. Someone dies, no matter how close you are to them, you move on. That helps in a lot of ways.

If you get married really young, you gotta hope that the both of you grow in a similar path in a similar way, so when it’s twenty years later, you’re in a similar spot.

This article is from Esquire, click here to view the original