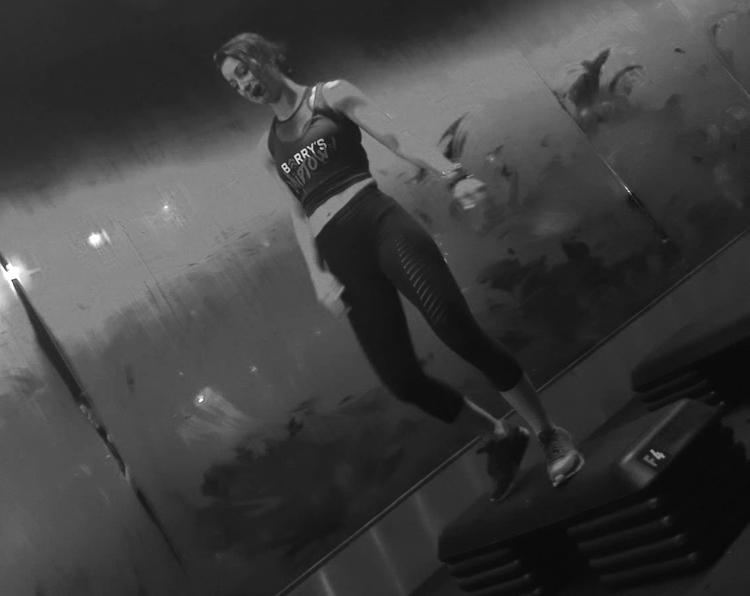 “In life people want to support people they feel a connection with.”
- Rachel Robinson, Barry's Bootcamp

It is 7:25 a.m. and the music in the red room feels like an earthquake rattling my brain. In front of me, the mirrored wall is shaking from the twenty treadmills running at full steam. The song just transitioned from an African warrior chant into a remix of Jay-Z and Toto. While it brings about a sense of nostalgia, that feeling is quickly washed away by my survival instincts. Anxiety? Who has time for anxiety. I can hardly breath, and a female version of Mad Max is yelling at me at the top of her lungs. “Don’t stop, Alan,” she says as she pushes the class to run ten miles per hour at a 12 percent incline for ninety seconds. “This is why you came here; you want to be better,” she howls as she counts down the last five seconds of our run. Sweat begins to drip into my eyes and mouth, but I won’t stop. I can’t stop. This is our fourth sprint in twelve minutes, and while some of us are starting to look delirious, others haven’t even broken a sweat. I’m with the former. I hadn’t run above a seven since I was twenty-two, but now I run on ten regularly, and because of that, I would follow this woman into the gates of hell. In this room, she is a golden g-d, and I do what she says because her workouts are the fountain of youth. This is the answer I’ve been searching for, the antidote to a connected and complicated life. A chance to just be. To shut it all off. To forget, get lost in my most basic self, and recharge my spirit. Thank you, Barry, whoever you are, and thank you, Rachel, for channeling your intensity for all of us.

I discovered Rachel about six months ago. After attending a group fitness session taught by legendary big-wave surfer Laird Hamilton and his wife, Olympic legend Gabby Reece, I was inspired to engage in some sort of regular group fitness. My friend Jack told me about his experience with Barry’s Bootcamp and encouraged me to join him. I can’t say I was hooked from class one, but I saw a path to a better me from the beginning. And I thought to myself, why did I not engage with this sooner? The truth? Barry’s has a reputation for being really hard and I didn’t want more hard in my life. I’d heard stories of people getting injured or throwing up, and I didn’t want to be that person. It intimidated me, even though I knew the path to being better is always hard. Those stories are half urban myth, half hardheadedness. Do people throw up? I’m sure they do, but it’s because they aren’t self-aware or confident enough to stop when it’s too much. You can’t push yourself to the brink on day one and expect to build a healthy habit.

But let’s get back to Rachel.

After a couple of weeks of Barry’s classes, you begin to realize the teacher makes the experience. In the case of Barry’s Miami, Rachel takes that experience to a whole other dimension. She takes the model, the practical offering, and adds her creativity, the emotional offering. And it is her creativity and energy that makes all the difference. Her classes are filled to the brim with the same faces for two simple reasons. First, they’re intense and constantly changing. She never repeats the exact same workout. There’s no formula. She plays great relatable music in all genres, outlines the next days class the night before, and is in it with you from start to finish. There is not a minute of the class that she is not highly engaged. Second, she connects with the people in the class. When I asked her how she built her highly attended 7:10 and 9:30 sessions in Miami Beach and Midtown, she explained that when she started teaching, she would take any class they’d allow her to. The attendees of the other classes experience her and some would start showing up to her regular slots. Eventually, she built a tribe and is able to maintain that tribe by delivering consistent quality and connection. She knows your name, and she speaks to you with her eyes and her voice during the class, encouraging, scolding, joking; using whatever means she has to connect. She makes the class more fun than hard, not an easy task, and binds the community through a shared struggle.

The funny part is that Rachel, a Miami native, is actually shy. When you get her one-on-one, she’s soft-spoken and focused on being a dedicated wife to her partner, Natalie Gee, and mother to her kids, twin boys with a girl on the way. But when she’s teaching class, another aspect of her personality unfolds. Rachel has found a way to take the boundless energy of her youth and, through experience, focus it on doing what she was meant to do. Rachel is a perfect example of a supercreator in action. She isn’t a rocket scientist and she isn’t a mogul. She’s a creator who is living her purpose and at the same time serving her life, her audience, and her truth. And while it’s beautiful to watch, you’ll have to put in a lot of effort to enjoy it. But I promise you, it’s worth it, and Rachel wouldn’t have it any other way.