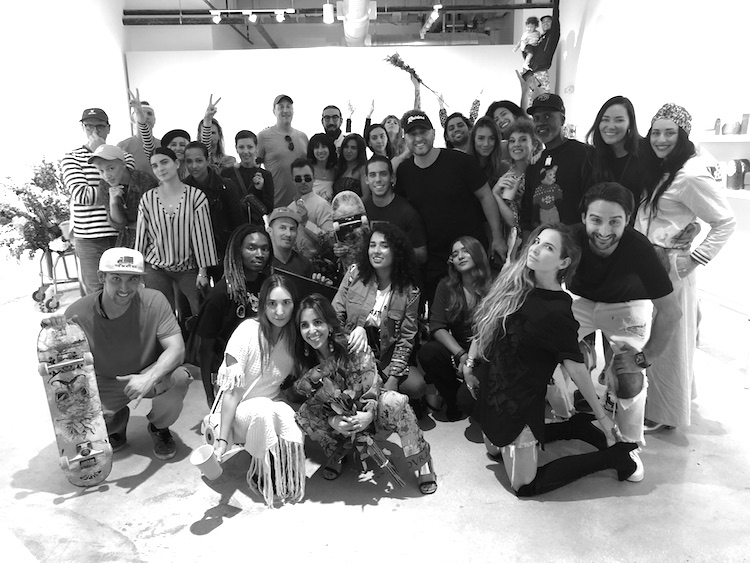 “the designer behind the coolest clutches in the world”
- Nylon Magazine

I knew she was different when I met her. She was petite, around five feet tall and ninety pounds, with big eyes and a captivating smile that implied, “I know something you don’t, and I am not going to tell you what it is.” But beyond her beauty, she was extraordinarily creative, with the kind of energy that bubbles up without intention—it’s just part of who she is. When you combine that type of creative energy with sensitivity, kindness, and a love of family, you’re talking about my ideal woman…which is why I asked her to be my wife. But it just so happens that Gelareh Mizrahi is also a perfect example of what everyone can manifest in the Age of Ideas.

When I met her, Gelareh had recently graduated from the Parsons School of Design and was helping her cousin Aimee with her clothing brand, Queen of e.vil. The two of them would lock themselves in Aimee’s apartment for endless hours and cook up crazy design ideas that would end up on T-shirts, sweatshirts, and cashmere sweaters sold in department stores and boutiques from Dallas to Dubai. (You know that amazingly inspirational gear you pick up at SoulCycle? Aimee and Gelareh came up with the initial designs.) But before long, Gelareh, with her creative energy and desire, needed a new outlet; she wanted more.

That was when the universe (and her mother) swooped in.

One afternoon Gelareh’s mother Gilda was working in her boutique in Georgetown, an upscale area in Washington D.C. A customer noticed the python-skin handbags she had for sale and commented, “You know, I could make similar handbags for you. Maybe I could do a private label for your store.” Gilda said, “I don’t really want a private label, but you should speak with my daughter. She’s a fashion designer in New York.” And so Gelareh was put in touch with this woman, who owned a factory that produced handbags. A couple of conversations and emails later, an arrangement was in place: Gelareh would design and sell the python handbags in the U.S., while the woman would handle producing the bags overseas, and they would see how things developed from there.

I was skeptical; yes, she had a partner, but no start-up capital. Why wouldn’t she just get a job doing design for someone else? But Gelareh was determined, and when she is determined, get on board or get out of the way.

The first step for her new business was to get a booth at the Coterie show, a wholesale fashion tradeshow where all the major retailers buy from all the major producers. When you aren’t a recognized name, they don’t just hand you a booth, and most booths are committed months in advance. If a newcomer is lucky enough to score a space, it’s usually way in the back. That’s what happened here. Gelareh designed a low-cost but appealing booth for the Coterie show, and her father, brother, and I built it on-site, way in the back of the Jacob Javits convention center.

I wanted to help with the sales process, but Gelareh was not having it. She asked me to go back to work and show up when it was time to break the booth down. Each night she came home exhausted, collapsed in bed, and left the next morning at the break of dawn. When the Coterie show ended, I broke down the booth. As we began our drive home, Gelareh was silent. She had not shared any sales numbers, so I was worried that no sales had been made. I was afraid of the impact this might have on her confidence and our new enterprise. But before long a subtle grin began to show on her face.

I felt inspired to ask, “So did you make any sales?”

“What?!” I cried. And proceeded to scream with glee like a young girl getting her first Barbie doll.

Now, let’s stop for a moment. Gelareh did not own a factory. She did not have a sales force—or any employees, for that matter. The business at this point was entirely financed by the bag producer, a lucky break, but the start-up costs were no more than $20,000. Gelareh went from an idea to an international brand in less than a year with no personal capital investment and only the strength of her creative designs.

From there things continued to evolve. As the business grew, Gelareh renamed the company Gelareh Mizrahi and used the Internet, mainly Google and Alibaba, to find a new producer who could handle much higher capacity. With full control of her brand, she decided to fully express her creative vision, and her designs became more personal. She combined her love of high fashion with her Persian heritage and her experiences roaming the streets of D.C. as a child and released a python-covered skateboard. It immediately put her on the map. It was interesting, different, and naturally sharable; people wanted to talk about it, ride it, take pictures with it. It caused so much buzz that the New York Times featured it in their Sunday Style section.

The launch of Gelareh’s namesake brand happened just as Instagram started to develop into a dominant social platform. As a visual person she took to the platform immediately and studied it like a lawyer preparing for the bar—except that she loved it so much it was like studying her favorite television show. She spent hour upon hour taking her highly sharable product and creating interesting, beautiful, and engaging stories to share on her feed. She also told her story and got her audience invested in her success. She lent the bags to influencers—friends of friends of friends before there was really such thing as “influencer marketing”—and it worked. She gave her creativity and time generously to her community, and they gave back their support. The online publication Fashionista celebrated these marketing efforts in an article whose banner text read: “How handbag designer Gelareh Mizrahi used social media to increase sales by 80 percent. The young brand is a success story for using non-traditional marketing strategies—namely Instagram and strategic placement on street-style stars.” Gelareh was figuring out the new paradigm, and I had a front-row seat.

In the meantime I was the chief marketing officer of a hotel company known for innovation and creativity. Yet when I pitched non-traditional marketing methods to the management team, the response was puzzlement and disinterest. Influencers? What are they? Social media? Isn’t that for kids? Content? What are we, a movie company? They were happy to spend hundreds of thousands of dollars on traditional marketing, succeeding only in losing market share and degrading our brand value, while at the same time Gelareh, with virtually no money, was building a brand from the ground up.

As Gelareh’s business continued to grow, one holiday season we sat together and wrote out our goals. Gelareh decided she wanted a mentor—someone to help take her business to the next level—and she wanted her bags to be sold in one of the biggest and best stores in New York, a marquee account. She wrote out the name of the store, hoped, and prayed. A few months later, through Instagram and the recommendation of a friend, she met Stacy Caldwell. Stacy had just come off a stint at a major fashion house and was looking to invest her time in helping some small brands grow. Stacy agreed to work with Gelareh under an arrangement that her small business and our small family could afford. A couple of months later Stacy was able to land a meeting with Barneys New York, the holy grail for a young designer. A seal of approval from Barneys would mean the brand had officially arrived—and, yes, Barneys was the name of the store Gelareh had written down.

At the time Gelareh was pregnant with our second child, Teddy. I remember we were driving in Soho when Gelareh got the email. Barneys had placed an order! All their stores in the United States and in Japan would eventually carry Gelareh Mizrahi handbags. We cried. We screamed. We played loud music. It was surreal. She had done it.

Gelareh’s journey is an eye-opening case study as to what is possible for anyone in the Age of Ideas. Yes, she is talented, but the route she took to share this talent is open to you and me. She has a skill, a superpower, and she has been able to amplify it and manifest her power by using tools available to us all. She built her website on Wix and then Shopify. She uses Instagram to market her business. She found her producer on Alibaba. She found her advisor on social media and through friends. Though things are going well—Gelareh recently opened a shop in Miami’s Design District, Vogue featured one of her bags as an “it” handbag in 2017, and she was recently picked up by Kith, Selfridges, and Lane Crawford — we are not moguls. Gelareh is just a hardworking person who wanted to create and share her art. Thanks to the time in which she was born, she had that opportunity and seized the moment.

There is nothing stopping any one of you from using the same model, tools, and platforms to build an enterprise based on your creative ideas and generating significant value and fulfillment in return.

Excerpted from our upcoming book, The Age of Ideas, for more click here