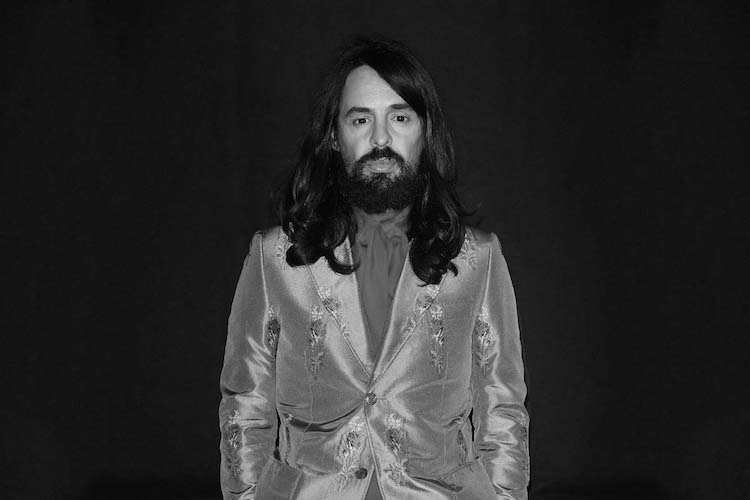 Alessandro Michele was announced as Gucci’s new creative director in January 2015. With the strong support of Marco Bizzarri, the label’s CEO and president, Michele was given free reign to bring his idiosyncratic sense of vintage style to the Italian fashion house, leading to a period of impressive growth at the house. In March 2017 the house reported an “exceptional [financial] performance across the board,” with a record first quarter revenue increase of 51 percent — its strongest in 20 years.

Alessandro Michele was born in Rome, where he grew up with an instinctive appreciation of visual stimuli thanks to his mother’s love of cinema and his father’s interest in sculpture.

After studying costume design at Rome’s Academy of Costume and Fashion he joined the Italian knitwear brand Les Copains. Then Michele began to work under Karl Lagerfeld and Silvia Venturini Fendi at Fendi, where in the late 1990s he had notable success in designing leather goods. Tom Ford hired him to design bags for Gucci in 2002, where he has been working ever since, becoming associate designer to Frida Giannini in 2011, before being invited to take up his current post.?

Responsible for all of Gucci’s collections, product categories and the company’s global brand image, Alessandro’s unique understanding and appreciation of the historical codes of the house, combined with his contemporary sensibility, has created a compelling new narrative for the brand.

“I literally destroyed everything and created something new. We destroyed the old attitude of the company.”

“To make something new in fashion, you have to stay in a little bit of mad place and do a revolution.”

“Contemporary is whatever your head wants it to be.”

“I’m not obsessive about the future. Future is not something I’m interested in a lot because it doesn’t exist.”

“Beauty is an open space but very sacral, very personal.”

“The way you dress is really the way you feel, the way you live, what you read, your choices. That’s what I want to put into Gucci.”

“Trees and flowers are so important. The idea of blooming is the idea of becoming something different.”

“I’m not conscious of being a revolutionary. This is my life, looking through my glasses at my little world, but this world seems to be full of people who understand it.”